Okayyyyyy!  Now the pics are rolllling in and I have a story to tell – and yes, I am a GIANT dork and will likely buy a handful of these pics, since it was my first costumed race…and..yeah 🙂 Anywho, since I got the stats outta the way already, here’s my OFFICIAL 2012 PRINCESS HALF MARATHON RECAP…in 3….2….

After an early-ish night, I had set my alarm AND a wake-up call for 3 AM – see, shuttles start at that time, and you are *supposed* to be in your corrals by 5 AM, though the race doesn’t begin until 5:45 – heh, you will hear more about this later, but I digress – and whattaya know, I had these crazy jitters that I wouldn’t get up on time, so I was wide awake at 2:45.  It was a weird feeling because I wasn’t nervous at all about the actual race, but I kept thinking, “how terrible would it be if I traveled all the way to Florida and I missed the race?”

I cancelled my wake up call, turned off my alarm and got ready…my outfit was all laid out for me from the night before:

Custom tank (repurposed/reconstructed from three tank tops!), Champion c9 (Target!) Sports Bra, Oiselle armwarmers, iFitness belt and my lucky Lululemon skirt – which, on a side note, is about to be retired from racing – plus my unpictured Zensah compression socks + Saucony Ride 3 shoes…good to go! Busted out the Body Glide, fixed my Mulan hairstyle and was out the door by 3:10.

When I arrived to the shuttle stop, the bus was already there – I just climbed right on!  The ride over to Epcot was quick and DARK! We were dropped off on the right hand side of the massive parking lot and walked over to the race start area like zombies…okay, most people did!  I had weird adrenaline going and was powerwalkin’ my way to the Race Retreat.  After all, I paid extra, darnit, I was gonna maximize my usage!

After showing my wristband, I entered the fancy tent – it was HUGE! There was food, movies, big TVs showing the action outside, a character greeting location and our own portapottie and changing area.  Nice!  After grabbing a plain bagel, a pack of PB, a bottle of water and coffee, I quickly found Malinda and Leah and sat with them 🙂

Quick refreshment note: The food was fine, but the coffee?!  WOW. Terrible! I need to remember to bring my own next time…

Before we knew it – it was time to leave our plush accommodations and head out to the start line.  Since I was in Corral A, I knew it’d be important to head out extra early…but as Murphy’s law would have it, the crowd was MASSIVE – though if the crowd were a cloud, there definitely was a silver lining: I ran into a few people from Charlottesville (RANDOM!) and even saw my friend Ashley from my MK days!

We were trudging along when we head a very unwelcome announcement…it was a 5-minute warning!  We had to speed up into a bit of a jog…once we broke free from the slowness, we had to book it! Right at the 2-minute warning, we had edged into Corral A…phew.

Just as all runDisney events begin, there were AWESOME fireworks!  It was cool to hear the Fairy Godmother begin the race….and we were off….

The first few miles could be described in three words: DARK, CROWDED and DARK.  The longer stretches of road had lighting sporadically, but you definitely had to watch your footing. I was trying to minimize my weaving but it was pretty unavoidable, especially in the more narrow spots of road – some offroading was necessary! Still, I was keeping what I thought to be an even pace, and before I knew it, we were passing though the Magic Kingdom autoplaza, and on our way to one of the most exciting parts of the race…MAGIC KINGDOM!

We entered the park through the front vehicle entrance, where I used to drive guests in when I was a VIP guide, so that was nostalgic…and then we were backstage of Mainstreet, and entered in the Tony’s Town Square gate!  Running down Mainstreet was awesome…cowbells, lots of support and signs…just a great excitement in the air!  We powered through Tomorrowland then and past the new construction of Fantasyland…eventually to the main event itself: the Castle!!

I honestly tried to slow down a bit so I could get a good pic out of this part, but it was just so exciting that I doubt there was much difference…

On the other side of the castle, I cruised down and out, through Liberty Square, Frontierland and out the gate to where parade floats are…there were  a great deal of characters there, and it was about that time that I noticed that there were two women near me wearing all pink – one was keeping a pretty even pace, and the other was juicing it, but then stopping to take pics with nearly every character!  I was glad to have them both nearby, because I think they kept me anchored through that part of the race, pacing-wise…

Mile 7, Kelly Clarkson’s STRONGER blared out, which I thought was a nice distraction!

On the way back to Epcot, I began thinking that my splits were off with the mile markers, but I was trying not to concentrate on that so much, but to just take in the event…it was definitely awesome to be surrounded by so many strong women, and it wasn’t until that stretch down World Drive that I began to notice them men falling in and passing (they weren’t allowed to start until Corral C). The miles rolled on, pretty uneventfully, and I was glad to have trained in Charlottesville since the ‘hills’ (highway ramps) were known to be the bane of many princesses’ existences….

Finally, I saw Spaceship Earth and I knew I would be finishing soon!

We came in on the right side of the park, and I shouted out to my friend Jase who was working the event!  It was so awesome to see a familiar face and it definitely perked me up…coming in Epcot, I really felt at home…and I could so absolutely visualize the each next turn, like the back of my hand…we jetted through to the juncture of Futureworld and the World Showcase, and made the turn around…

Back down to the Guest Relations lobby, I shouted out my friend Amanda’s name, since she was working, too!  Yay!  Now on, on on!  Almost outta the park…

past the gospel singers….out the gate…Mile 13!  And then…I could see the finish!!

I knew I could sprint to the finish, but just as I amped it up, I pulled my earpods right out!  They were hanging everywhere, and I tried to gather it all back up…this song came on.. 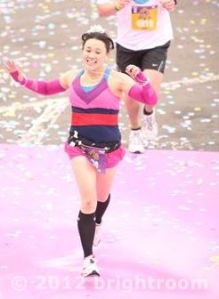 The race was definitely excellent…wayyyy more crazy crowded than I imagined (and that comes from me, a former CM) but great, nonetheless!  I walked through the chute, was pixie-dusted by a fairy godmother in training, then received my medal from a nice grandfatherly type gentleman before picking up my post-race snacks and drinks…nice!

I headed back into the retreat to retrieve my items (they have a private bag check, very convenient and fast!) and then hung out in the tent for a while, noshing on a delicious muffin and called my parents.

This race really was a fun one, and I’d definitely recommend it 🙂