That time I went to jail…

Last night, I logged on to my tweetdeck right around 7:55. I had just finished baking some heath cookie bars and was prepping for #runchat (you should definitely join in sometime if you’re a runner BTW, second and third Sunday nights 8-9 PM Eastern, here’s your reminder).

As per usual, it was a fabulous and fast-paced conversation! The format in this session was a little different, as questions were generated from users throughout the week. It was great ‘seeing’ lots of my friends online and meeting new ones too – and before long, it was over…and I was considering jumping on over to #ultrachat, which usually runs each Sunday night 9-10 PM, EST…except…well…I couldn’t.

Now, to my defense, I *think* I must have broken the “smaller limits for semi-hourly intervals” but to be totally honest, 1K…well…it could have been possible, too. What can I say? I love twitter! And this counted for all twitter-related activity for the day so each daily mile post, instagram or RT…it was all counted.

Haha…but it got even BETTER! My pals that had seen my dismay took it to twitter to air their grievances! 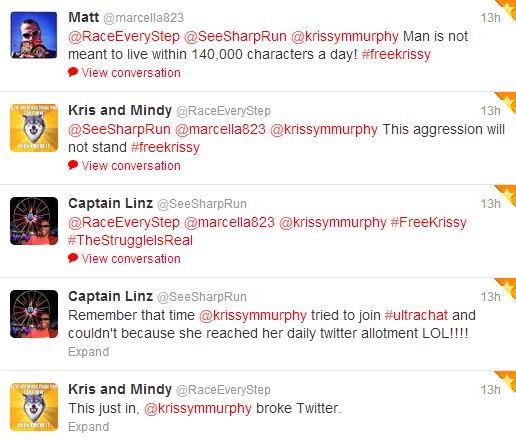 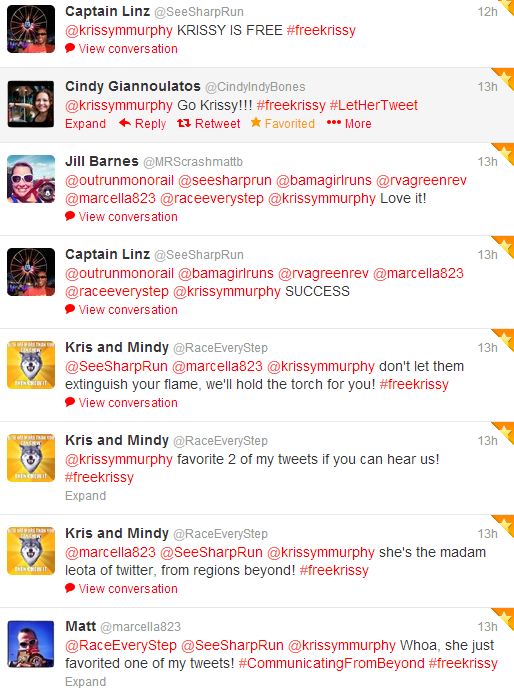 I was laughing so hard, I cried! Following the drama was certainly entertaining; then I found out I could favorite tweets, despite my limitations! Hehehe…good stuff.