I don’t recall when I learned about Club 33 for the first time, but ever since I guided the UnDISCOVERed Future World Tour in Epcot, I knew that it was an exclusive place for the most elite of Disney guests. Lots of rumors and urban legends surround this famous address of 33 Royal Street, which add to the exclusivity and intrigue.

So naturally, I needed to find out how I could get in! 🙂

From what I knew, the only people that are able to secure reservations are members of the club – and the club, well it’s pretty darn exclusive! According to Wikipedia, as of 2011, there was a 14 year waiting list for new memberships. The membership waiting list was re-opened in May 2012 after being closed for over a decade. And get this…corporate members pay an initiation fee of $27,500, and individual members pay $10,000 in addition to annual dues, which are about $6,100 or $3,500 – yikes! That wasn’t happening for me anytime soon!!

So, it was back to the drawing board. I knew a few friends from my cast member days that had visited the club in the past, through family or friend connections, but whenever I asked them about it, the response would be something like, “oh, we were just lucky to be asked,” or a “so-and-so arranged this for us….” kind of situation – and to be honest, it wasn’t something I wanted to annoy anyone about, I just wanted to find out the best way to get in!

For the weeks leading up to our trip to Disneyland, my friend Matthew and I worked diligently at a few angles – each to no avail. As much as I wanted to experience Club 33, I also didn’t want to irritate or get in ‘anyone’s face’ about it, either. So, I patiently  searched around, eventually making a connection with a friend in a running group that had an in through her corporation.

In the interest of protecting her privacy, I will call this friend Lillian 🙂 Well, Lillian is a sweet friend and she had the pleasure of have visited Club 33 several times in the past, thanks to her corporate membership. I found this pretty interesting and kind of geekily cool as one of the urban legends of the name “Club 33” came from just that: the number of corporations that originally sponsored pavilions / attractions in Disneyland around the time that it opened in 1967. Take a look. So that was kind of neat!!

Lillian was going to be in town for the Tinkerbell Half Marathon as well and had arranged two separate reservations: one on Friday night, prior to the race and one on Sunday, after the race. After exchanging some messages, Lillian was able to secure two spots for me – which I was definitely grateful for – after some deep thinking, I asked Matthew if it was alright if I took my sister along and he agreed it was the best idea…and it was settled: my sister and I were going to Club 33 on Friday, January 18!

There was only one problem with this situation – Club 33 had a dress code, and since I confirmed this reservation while I was on racecation, all I had were running clothes! Yikes! Thankfully after a visit to Apricot Lane, that was resolved. Phew!

So on Friday evening, we arrived in New Orleans Square and waited for Lillian to arrive. We scoped out the area – people waiting to get into the Blue Bayou…wandering around the shops…a little chill in the air…it was so exciting! We saw a few people enter into the waiting area by buzzing the button at Club 33 and we just couldn’t wait to go in!

Lillian was running late, but in the meantime, we were able to meet our other dining companions – P and her family! They were fun and we chatted it up before Lillian arrived.

Once she did arrive, we buzzed in and were met by the friendly Cast Member inside the lobby. He welcomed us to the restaurant and gave us a little history about the cool elevator…apparently Walt Disney himself had seen this incredible glass lift in a Paris hotel and offered to purchase it, as it had impressed him so much! Well, the owner refused, but that didn’t deter Walt – he had some staff travel to Paris to take measurements and make drawings to recreate it for Disneyland 🙂

On the second level of Club 33 are the dining areas: the Main Dining Room and the Trophy Room. We were in the former.

The lighting was very subdued and although the vibe was fancy, it didn’t feel stuffy or uncomfortable, which was a nice surprise. We were just soaking in the experience!

Oh, and here’s something else to consider when you visit Club 33 for dinner…the minimum charge per person is $80. As a person that usually spends $25-30 (total) for both me and hubby…that was interesting. Fortunately, my mom was generous enough to cover the meal for J and myself.

We were too excited by the menu options to go prixe fix (seen above) so we did our own ordering. Here’s a run down of what we ordered: 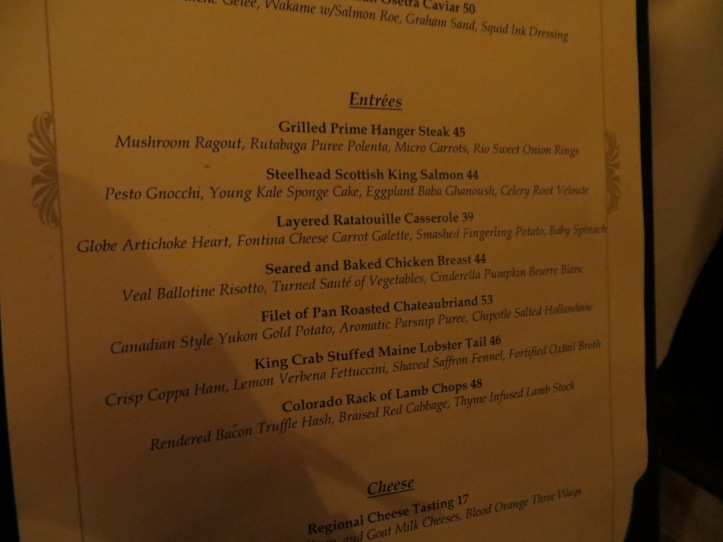 The food was DEVINE! I mean, wow. The combinations of flavor, quality and presentation was beyond what we could have imagined. I ate half of my entree (you could cut the meat with your fork, that’s how tender it was) though because you KNOW I had to try the desserts…

We didn’t have a dessert menu, but believe me, when our amazing server uttered the word “s’more” I did not hesitate!

J loves creme brulee as much as I love s’mores so – yes, we were SMITTEN ❤ Lillian was celebrating a birthday that week so she requested the birthday cake. So cute!

Before heading back to the table, we also had to check out the balcony, looking down onto New Orleans Square:

…and a little dance time – you, channeling the spirit of Mardi Gras 😉

Before we knew it, we realized that we’d been in Club 33 for several hours – and it was time to bid adieu to our dining mates – though there was one matter that still had to be taken care of…

Glad I wasn’t taking care of the total bill! Wow.

We thanked Lillian profusely and ended up walking with her out of the park. It was such a treat – and it made me really realize that it was totally worth it to ‘work our way’ into this experience – it made us appreciate it a lot more. So my advice to anyone wanting to visit Club 33 is this…don’t give up! Use your social networks – online and in person. You may be surprised who you know is a member – and once you do figure it out, THANK THEM! In our experience, I was able to gift an extra theme park ticket to Lillian that I wasn’t using as a small token of my appreciation, but like I said, there was really no way we could thank her enough! Visiting the club is really something special.

What are the special Disney experiences on your bucket list?