I was going to wait to do another post after some BIG NEWS….but after a quick glance at the blog, I realized that I had not done a weekly update in…well, weeks. So, this one won’t be super long, but here goes… 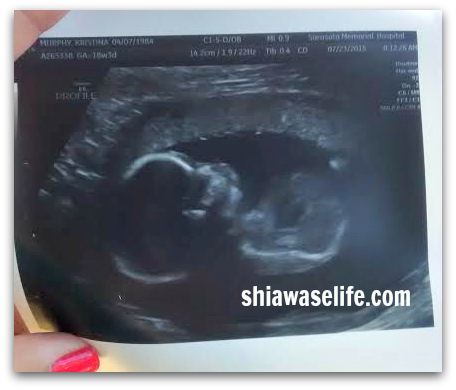 Yesterday, we had our second-trimester scan, also known as the “Anatomy Scan.” I was really looking forward to seeing Baby M again, as it really is incredible how fast baby grows in a matter of weeks!

The appointment was at 8 AM, and the night before, I really was too excited to sleep. Still, I did the best I could and got about 6 hours. I had a few very vivid dreams, including a dream about the sex of the baby (which turned out to be RIGHT!)

Deciding whether or not we’d find out if we were “Team Pink” or “Team Blue” was something that had been weighing on my mind for several weeks. I had read and re-read the responses from this post, as well as asked fellow mamas in person. I thought through the pros and cons…and asked hubs what his opinion was.

What surprised me was that hubs was totally fine with ME making the decision. WHAT? That’s some power! I was wavering for a while….until my mom told me the great news that my cousin would be expecting too, and she had found out she would be having a daughter.

It was a happy surprise, and since my mom and my aunt spend a lot of time together, it made me think that it’d be nice if they both knew as much as they could about their future grandkids (firsts for both our families). Secondly, I had started collecting potential names of Baby M….and was noticing my choices were all over the place…and that eliminating half my choices might make things a little clearer!

Lastly, I had been doing extensive research on cloth diapering since that Week 14 post – and after countless hours of research (seriously, hubs was making fun of me…calling me obsessed) I was ready to start building my stash, and wanted to be able to buy non-gender neutral items 😉

Poor Dug had to be my CD guinea pig >>

And I am not telling (until I tell my mom in person tomorrow) but I am curious…do you have a hunch?