Last month, I was reading my friend Mary’s blog and learned about a new event coming to Tampa, the Fit Foodie Race Weekend! I had recalled hearing about this series in its other stops before, so I jumped over to learn more about it.

With both a 5K and 15K race offering, cooking demonstrations, social events and other active programming available, I thought it would be a fun thing to check out…and when I saw that the races were stroller-friendly, I was definitely IN! So, I messaged my pal Jillian to see if she was interested, and within hours, we were both registered.

Although I had been training with Abby through much of the summer in our jogger, our furthest distance was 7 miles – a bit short of the 15K (apx 9.3 miles) we would be traversing on race day. However, we’d be doing intervals with Jillian as she had been easing into her marathon training, so it’d be a relaxing and fun morning as the kilometers clicked away! 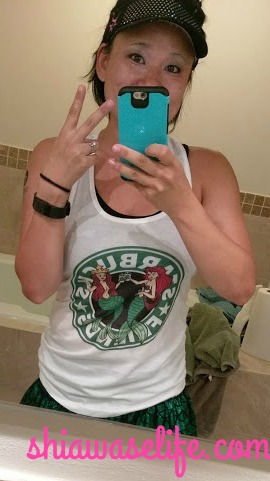 With a 6:45 AM start (along with the fact that we had to do race-morning pickup, as it’d be a little silly to drive an hour the day before) and about an hour drive, Abby and I hit the road at 4:30 AM. The good thing about being a sleep-deprived mombie (LOL) is that this didn’t seem that terrible of a wake up at all. It was also nice to drive straight to the race with no traffic at all!

The race was staged at Cotanchobee Park, which is right in the Channelside area of Tampa. We parked in the same garage that is utilized for events at Amalie Arena, so that was a snap! We found a great spot, and made it to the pickup area smoothly.

Since we had the stroller, I had all our gear with us – a small backpack, filled with emergency items (change of clothes for me and Abby, diapers, wipes) as well as both of our water bottles, and a backup phone charger. This is a definite plus of running with a stroller – no sherpa-ing all your junk on your body, lol! Hah! However, the one negative about having the stroller? Logistics of having to go to the bathroom before the race! There was no way I was carrying Abby into a dark port-a-pottie with me, but I had to pee! Thankfully, I remembered the Marriott was next door to the park, and took a chance that there’d be a family restroom off the lobby…yes! Awesome (also, there was a Starbucks in the lobby which was pretty awesome too).

Around 6:15 AM, we met up with Jillian, and also met her friend Rebecca. We strolled through the tunnel over to the starting line where I was happy to run into Mary as well. Looking around, it seemed that perhaps the 15K was not a huge group, but that made it easy to find a good spot to line up with the stroller.

Without much fanfare, the race started right on time, and we were off! It was still dark, but soon we were out to the Bayshore area, where the bulk of the race took place. Although I had walked the Bayshore path once before with Kat (hey, remember that???), I have actually never run it – it was quite a treat! Beautiful views the entire time…it was, of course, horrendously humid, but about the time we hit the turn around, we got some pretty nice breezes.

The halfway point was also where I switched on some tunes on my phone – runDisney spotify lists, of course 🙂 We struck up some conversations with fellow runners on course on account of our fabulous tunes!

Now, this entire time, Abby was being really chill…for miles 1-4ish, she was fast asleep, and after that, she was awake but just hanging out, babbling or giggling. She was all set up – she had her little fan going, a blankie, her stuffed bear, pacifier, water bottle…but at Mile 8, she had hit her limit! Suddenly, she was WAILING and wanting absolutely nothing to do with the run anymore! I’d run up a few paces of Jillian and stop to check on Abby, but after a few stops, her volume was WAY UP. At that point, I apologized to Jillian that we’d have to split, and I took off to get to the finish line ASAP!

For that 1.3 miles, Abby and I FLEW! A few race participants, as well as police officers on course shouted funny and encouraging things to me (“Why is SHE crying? She didn’t even have to run!” or “Oh girl, I want to cry too.”) and that kept us going right to the finish, even up and over the bridge near the end.

We rolled in to the finish right around 1:58 and we headed straight to a little seating area right away so I could get Abby out of the stroller. She nursed for a few minutes, then was right back to her happy self!

A few minutes later, Jillian triumphantly completed her 15K as well, and we all headed to the finish area for our medals and the post-race party (also saw Meghann and I finally met Annalynn too!) There were all kinds of fun booths, including shaved ice, crepes, and more! After checking that out, we went to the Vitality Village section for some yummy little samples, too. There was a great vibe, and everyone was very friendly!

After a diaper change and some chill time on the benches, we made plans for brunch (at Datz! Yummmmm!!) and headed out.

I really enjoyed this race – it was low-key, but well organized. My only “complaint,” if I had to think of one, was a bit of confusion in regards to logistics (I noticed later on my bib that my shirt size was printed, but I never got a shirt, for instance, and results are still not posted, two days later – maybe I am just spoiled on that one, though). Still, it was a great value, and I would definitely return to this race/ race series.

Have you ever participated in a Fit Foodie event?