Last year, I learned of a new area half marathon in November called the Myakka River Half Marathon, which was set to take place 11-21-2015. Run in the state park that shares the same name, plus a fundraiser for the Florida Compassion Foundation, I was all set to register…until, of course, I realized that I’d be 8+ months pregnant for that inaugural event. So, I sat it out for the inaugural year, but was excited to register for the second running, when I’d more 11+ months post partum and ready to RUN! 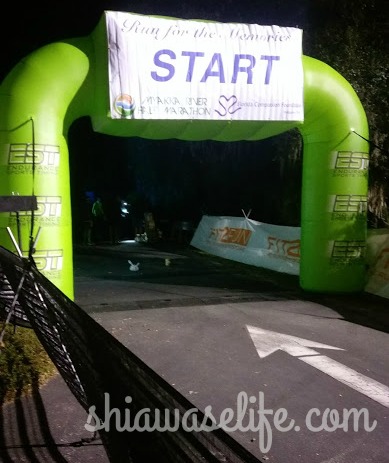 Well, as timing would have it, this race fell in a great place in my marathon training cycle, and served as a great “anchor” for this particular week, since we had been traveling. As my 21st (I think! I lost track!!) half marathon, I often go into the 13.1 race distance with a loose goal of 2 hours (~9 min/mile pace), and for this race it was no different.

Race morning began early (4:30 AM wakeup) so I could arrive at the Suncoast Community Church for same-day packet pickup and to catch an early shuttle to the park (you had the option of VIP parking at the park, but the shuttle was very smooth). The process was well organized, and I was at the start area more than an hour early, but that was just fine. I was pleased to feel a bit “chilly” (60 degrees) and wore my throwaway hoodie (which I ended up re-finding after the race, lol) right until the gun went off. 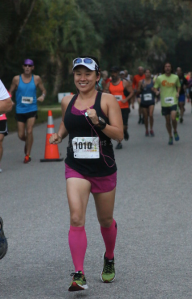 I told myself that I’d run by feel, but with the combination of glorious cool weather, beautiful shade trees and an open course (no congestion whatsoever), I noticed my first two miles were in the 8:20-30 range. Not super fast, but maybe a little quick – as I worked on getting the pace even, my Garmin decided to throw me off by completely shutting off (my bad, low battery!) and so, from then on, running by feel was my only option! In fact, I was a bit relieved to just run for the sake of it!

Water stations were plentiful and I walked through all but two of them. The course was an out and back, and though the miles were quiet, the cheerfulness of the volunteer race marshalls and water station attendants was just right. Around Mile 9 (I think?) I took an on-course gel (Honey Stinger brand) and that was just enough to power me up for the last few miles. 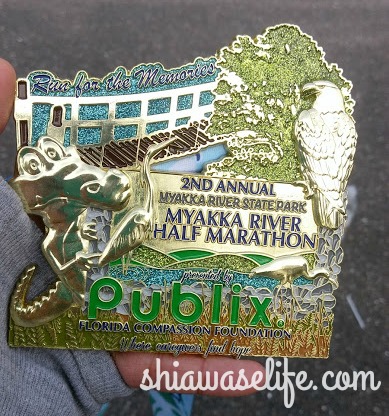 Each mile was well marked, and despite hearing that the course runs long (not like I would know, haha), I enjoyed each mile! The park really is gorgeous, and though I did not see any gators (we’ve seen them before on a previous park visit), it was just the perfect morning for a half marathon. A mild, cool breeze, sun peeking through the canopy of trees…these are things that remind me of why I enjoy living in Florida!

At Mile 10, I told myself that I could “open up the pace” a bit, and I have to admit, I felt awesome passing three people in those final three miles! I had no clue what my pace was, but as I turned the last corner of the course and saw the digital timing board just about to switch over to 1:50, I picked it up and crossed the finish line!

I’m still stalking the site for official results, but with the chip timing consideration, I was more than thrilled with my first official half marathon “back” running (I “ran” the Donna Half in Feb, but that was more of a ‘fun’ and ‘no pace expectation’ experience).  This race was an excellent value, and I would recommend it to anyone looking for a well-organized and ‘chill’ half marathon.

…and before I forget, here are just a few pros/cons for the race (aside from my recap, just general observations):

…so, did you race this weekend?